Design is influenced by a new appeal to simplicity and by the need to cater to mobile web traffic, which is increasing every year. In the face of this push to cut away excess, here are 14 design trends that have reared their heads so far in 2015.

When the hero image became popular, designers began paying more attention to typography. Picking an engaging font is crucial to drawing a visitor’s attention when so much of the site’s content is simplified and reduced as an effect of minimalism. Ad agency RSQ uses custom typography on its website and features a powerful statement without any other distractions to spotlight its message to audiences. 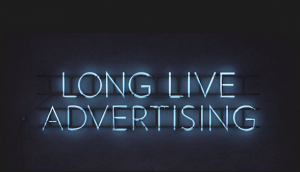 2.The reign of the hero Image

This year the hero image has changed in a few remarkable ways. Some sites have taken the HD photo one step further and embedded HD video onto their landing page. Others pursued the opposite route: blurring the banner photo or removing it altogether in favor of a simple colored background to draw attention to the text. Spotify’s site shows a blend of these trends, offering an image on one half of the page but leaving plenty of white space for its heading and a pastel and ghost button to boot. 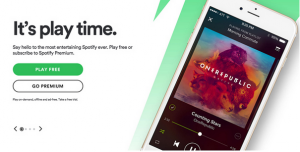 From simplifying logos and typefaces to cleaning up entire web pages, minimalism is the trend influencing all others. Websites are focusing more on their actual content and reducing all of the clutter around it. Footers, sidebars and borders are all disappearing, and even color palettes are being simplified as companies emphasize one dominant color in their visual design. StubHub's logo change is a perfect example of this trend. 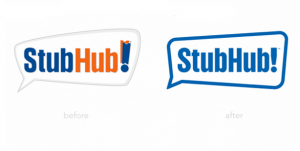 Designing with the mobile market in mind changes more than just aesthetics. It has impacted the way web illustrators think about organizing their content and how they let readers access it. Sticky menus and sidebars are falling out of favor to make room for content that readers actually want to see. These days, menus are at the top of the screen and are mostly hidden, noted by a single icon (often a stack of three lines called a “hamburger”) that when selected drops down or slides out into a more robust menu. Social media analytics company Unmetric has a beautifully simple example of this style of menu. 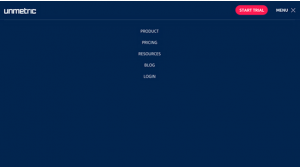 Web sites are moving away from loud, flashy buttons, and are embracing transparent buttons. Because they are less obtrusive, ghost buttons help sites highlight more of the content they want audiences to actually see instead of call-to-actions they would otherwise force users to click. Ghost buttons include only the outline of a button (no fill) along with a word or two in simple typography in the center.BigDrop, a web design firm, features a prominent ghost button on their landing page. 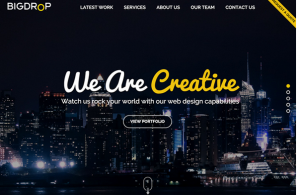 A way to make websites more engaging, parallax scrolling creates a three-dimensional illusion that draws audiences into a site’s content. Many brands now use parallax scrolling to create a more immersive effect for visitors. Dangers of Fracking uses this brilliantly as you follow a drop of rain from the clouds to the depths of the earth. 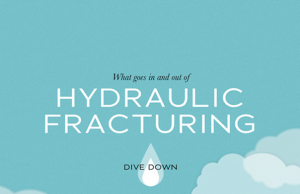 Nobody wants to click through multiple pages anymore. Instead, users prefer to scroll through content on one long page. This trend too has its roots in mobile web surfing because it is far easier to scroll down with your thumb than it is to click through multiple pages and wait for each to load. This year has reinforced that concept, and while few websites are only a single page, most are reducing the number of pages they have and lengthening the content on each to be more mobile-friendly. Smartwater’s website uses scrolling to great effect by making the visitor scroll up rather than down to illustrate that their water is distilled from vapor. 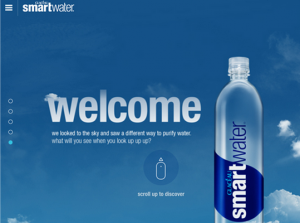 The days of the generic stock photo are over; jaw-dropping visuals are in. With communities like 500px and Unsplash, finding high quality do-whatever-you-want-with-it photography is easier than ever. As a result, websites no longer look like the result of an uncoordinated stock photo shopping spree. Now, they actually feel genuine. 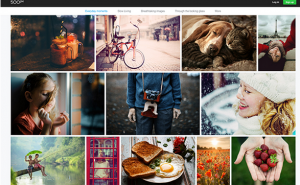 When Apple released Retina display, designers were up in arms. Upset that their graphics and images suddenly looked pixelated with Retina’s higher resolution, designers were forced to adopt new methods that would allow their illustrations to look good on and be compatible with any device. Fortunately, Scalable Vector Graphics (SVG) rose to the challenge. SVG presents graphics as vectors, which allows them to scale with different resolutions. With SVG, images maintain their clarity and sharpness on all devices. Snap.svg, a Javascript SVG library, has many examples available, such as this one below. 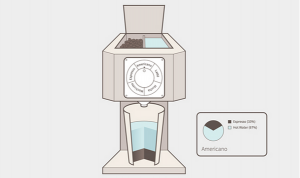 Call it a grid, tiles or cards, each of these designs creates the same effect: organizing content in an efficient, aesthetically pleasing way. A single column of content is inefficient and less user-friendly by comparison. Modular design allows a page to show more content to users faster, in a way that makes more intuitive sense and creates a more visually engaging layout at the same time. On its homepage, The Next Web offers a textbook-perfect example of good modular design. 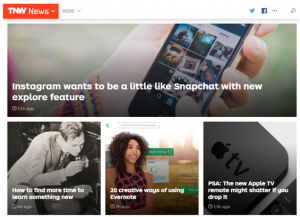 11. The evolution of flat design 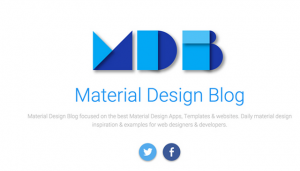 Alongside material design, line icons is the other movement finalizing the decline of skeuomorphism. Rather than an icon looking exactly like the object it represents (a design style that Apple popularized with its iOS icons), icons are created with simple lines and shapes that convey an action, object or thought we are all very familiar with. Many line icons have become universal in web design, such as the outline of a magnifying glass signaling the search function or the hamburger (three stacked lines) for a menu. Below are examples of line icons from OtherIcons. 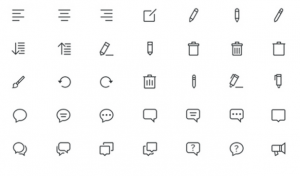 Split screen layouts are popping up all over the web this year. With a vertical split layout, designers are able to present twice the content to users in a clean and simple format. Websites are divided in half widthwise, featuring two separate messages. The split screen is a great way to show equality between two things because standard web layouts dictate the most important things come first. Car maker Peugeot uses a vertical split layout on its homepage to blend the human element of the car with the car itself, suggestive of the relationship between driver and vehicle.

Google Maps is everyone’s go-to map service, and it is only getting better. With customizable options, more brands are integrating the service into their websites -- a move that is long overdue. Companies can add Maps to their site and customize its colors to complement their preferred color scheme. 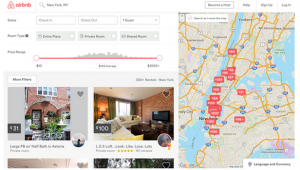 Top FB Message Us
Whatsapp Us